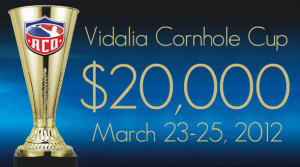 This event is open to cornhole players of all skill levels.

A player can enter the ACO Vidalia Cornhole Cup as a singles entrant, as a doubles entrant, or as a Crew - the best cornhole value.

The Crew competition is points-based concept developed exclusively by the ACO.  A Crew consists of four cornhole players accumulating points based on each player's finish in the Open Singles and each of the teams finish in the Open Doubles. The Crew with the lowest overall point total wins the coveted ACO Vidalia Cornhole Cup.
For more information about the ACO Vidalia Cornhole Cup or anything ACO visit www.americancornhole.com or call Kortney 888 563 2002      .
About American Cornhole, LLC:
Established in 2005 and headquartered in Milford, Ohio. American Cornhole Organization, the ACO, is the governing body for the sport of cornhole. Offering official rules, sanctioned products, tournament listings, and comprehensive information about cornhole events.
About Vidalia, Georgia:
Known around the world for its sweet onions, the Vidalia Area is full of local flavor - and we don't just mean on the dinner plate. For more details visit - www.vidaliaarea.com