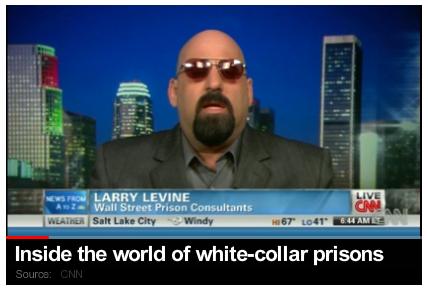 LARRY LEVINE, heavyset and bald, runs a thriving business out of a gated apartment complex in Ventura County, Calif., a setting that’s not at all bad for a home office considering some of the prison cells he’s lived in. But as he drops into his plush beige and white sectional couch to talk business, something is nagging at him.

The trouble is the new competition. All these guys are setting up shop, marketing themselves on the Internet, claiming they know the ropes and cutting into his market share.

To Mr. Levine, they’re a bunch of poseurs, with no street cred. After all, they’ve barely spent any time behind bars.

“Look at my résumé, I’ve got 10 years: high-security, medium, low,” said Mr. Levine, 50, who was in jail until 2007 on narcotics trafficking, counterfeiting and weapons charges. “These guys go in for a year and a half, maybe two. I’ve got more experience than all the rest of these guys combined.”

Mr. Levine is a prison consultant. The business — which entails advising people who are facing jail time on how to prepare for life on the inside, deal with medical issues, transfer to other prisons and even reduce their sentences — has been around for decades. It enjoys a burst of publicity when a boldface name like Bernie Madoff or Michael Vick hires a consultant.

But the business is changing. Behind the scenes, the profession is attracting a new crop of ex-cons who believe they can put their experience to work, rather than have it burden them in a tough job market.

And more competition means rising tempers and flying accusations. Some prison consultants say that others are so lacking in expertise that their businesses are practically criminal enterprises. Rancor among thieves.

“This industry’s exploding,” mourned Mr. Levine, who operates two Web sites, American Prison Consultants and Wall Street Prison Consultants. He reached to a nearby coffee table and picked up a piece of paper listing the names of several dozen competitors and the length of their prison sentences. This is not a rap sheet, it’s market research.

The business, he said, is “becoming saturated with people who don’t know what they’re doing.”

He and his competitors (some of whom find his prison time equally unimpressive) walk a fine marketing line, bragging about an extensive criminal record to attract customers. That can make it tough for potential clients to choose: How much incarceration time is enough? What kind of experience is right for the job — maximum security, solitary confinement, a knife fight?

To hear the consultants talk, most competitors aren’t worth the time of day.

“Let’s put it this way: If I was in prison, I wouldn’t share a chow table with Larry Levine,” said William Mulholland, who founded the Real Prison Consultant in 2010. He and Mr. Levine have had words about Mr. Mulholland directing people to free online resources about the prison system.

Mr. Mulholland’s Web site identifies him as the “#1 Qualified Federal/State Prison Consultant in the United States.” It adds: “I Challenge any other Consultants as to their ‘So Called Certified Credentials.’ ”

He offers advice free, he said, so he can build credibility. There’s another reason: He’s not allowed to charge for his services. That’s because he remains under supervisory release and faces limitations on interacting with known felons, who could be among his clientele. He spent 21 years in prison for violent crimes; he’s been in gunfights, has beaten people with bats and sold drugs.

He said he is building his brand for when he can begin charging in June 2013. He also has a Twitter feed and a YouTube video. The name of his blog: The God of Time.

Their prices range widely; some charge by the hour, some by the service, from a few hundred dollars to tens of thousands per client, depending partly on the consultant’s experience and work required. It’s not clear whether the number of customers is growing or just the number of people hanging out a shingle is.

The consultants’ Web sites promote a long list of services, including helping people petition to be sent to a jail nearer to home, getting them into a drug-treatment program that can reduce a sentence or transitioning them to a halfway house. Many people hire consultants simply because they’re scared and want to know what to expect. The consultants teach prison etiquette.

For example? “Never walk across a wet floor,” Mr. Mulholland advised, saying you might mess up the work of the prisoner manning the mop. And then he might kill you.

A Web site is where Vickie Skidmore, 58, stumbled onto Michael Frantz, an ex-convict who runs Jail Time Consulting. Ms. Skidmore was seeking help getting a transfer and some medical assistance for her son, Marcus Rosenberger, 36, sentenced recently to 33 months on several counts of wire fraud related to real estate transactions in Florida.

She talked to several consultants and settled on Mr. Frantz, she said, because he listened to her, sounded intelligent and lived in her home state. And he’d done time.

“I asked lawyers to help me, but they don’t understand what goes on in the inside,” she said.

Some consultants rely on testimonials. On its Web site, Executive Prison Consultants gets a shout-out from Tim Donaghy, a former National Basketball Association referee who pleaded guilty to charges related to betting on games. The defrocked referee is quoted as saying, “The professionals at EPC get results!”

The site attracted a potential new client named Jeff, a Missouri resident who last year pleaded guilty to wire fraud and, in a few weeks, will enter a federal prison camp in Kansas City for a one-year sentence. Jeff, who asked that his last name not be used because he did not want to widely publicize his conviction, said that he went looking for a consultant because, “I’m just interested in spending the least amount of time in prison as possible.”

He checked out a few other Web sites and corresponded with a competitor by e-mail, he said, but he was dismayed when the competitor responded with form-letter responses, including one that referred to helping Jeff and “his wife.” Jeff is not married.

Do the consultants make a difference?

They certainly can, according to people who work in the criminal justice system. A sharp consultant, they say, can help with complicated paperwork, in much the same way that a college consultant can help a family navigate complicated financial aid forms. That said, people can also do the work themselves.

Chris Burke, a spokesman for the Federal Bureau of Prisons, declined to comment on the industry.

Not all prison consultants are ex-cons. Some worked as prison guards or employ former prison officials. Others are lawyers. Their clean record is more of an asset than being able to brag about time behind bars, they say.

“You think a warden is going to change a decision based on advice from a former resident? That is just not going to happen,” said Joel Sickler, who runs Justice Advocacy Group and has been a prison consultant for 30 years and, before that, a prison guard. He said his unblemished past would go over better with prison officials when he’s trying to petition for, say, a client transfer.

The ex-convicts in the business see things differently, arguing that relevant experience matters.

Mr. Frantz, of Jail Time Consulting, prefers this metaphor: “If you had to have someone take your appendix out, would you go to a guy that runs a gas station?”

Mr. Frantz, 65, earned his nearly 36 months of experience in a federal prison camp in Miami after pleading guilty to tax evasion and Medicare-fraud charges.

He hired a prison consultant, and the experience led to an epiphany: crime could indeed pay. He decided to become a consultant himself.

Besides, his options were limited. “I knew when I got out, I’d be 62 years old, a convicted felon,” he said. “Who the hell was going to hire me?”

While in prison, he spent time in the law library, learning about penal regulations. He wrote “Jail Time,” a book about what to expect in federal prison that he published in 2009, a year after he was released, and started Jail Time Consulting. It was promptly shut down by a judge, who suspended the operation until Mr. Frantz ended his supervisory release in 2011.

Like other prison consultants, he questions his competitors’ business practices. Their rates, he says, can be outrageous.

The business is unregulated, no license required. There is a Web site called the National Registry of Prison Consultants — “the authority on trust in the marketplace.”

It was started last year by Steven Oberfest, the founder of the Prison Coach, who said he served 15 months in the ’90s after taking a plea deal for racketeering. (He said it was related to charges that his piano-moving company was involved in the theft and distribution of stolen grand pianos, accusations he denies.) He said the industry sorely needs self-regulation for it to be taken seriously.

“You can’t just have people popping into the industry,” he said. “Just because you’ve finished doing time, doesn’t mean you’re a better person.”

The registry has a list of the top 10 prison consultants, but lists only two, Mr. Oberfest and Mr. Levine, the consultant from Ventura County.

But Mr. Levine said he considered the registry to be “a hoax.”

“For me, my reputation and my experience is my badge of honor,” he said, not an affiliation with an industry group.

Mr. Levine said he thought the competition would thin out over time because the competitors lack marketing smarts. Besides, he argued, he has the criminal CV to back up the marketing.

If they handed out diplomas for prison savvy, he said, “These guys have maybe an associate degree. I have like a Ph.D. or above.