American Cornhole Organization (ACO) has scheduled January 9-12th, 2013 as the dates for the ACO World Championships of Cornhole VII 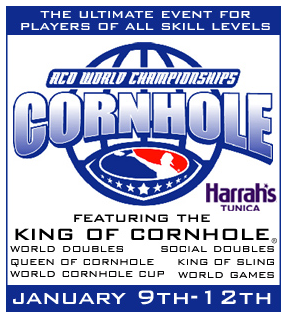 American Cornhole prepares for the biggest cornhole festival in Tunica, Mississippi January 9-12th, 2013. Pros and Social cornhole players from across the country will gather to compete for the Best in Cornhole bragging rights. Recreational and competitive championships titles are up for grabs. The King of Cornhole title is the featured main event.

The ACO World Championships of Cornhole VII provides plenty of cornhole action for all players participating in the event. Competition starts Wednesday with the Regional Points Invitational (RPI) for Singles and Doubles, followed by the large Open tournaments for Singles and Doubles. The best players and teams in the Open will advance to the King of Cornhole and the World Doubles Championship.

Remaining players and teams participate in the King of Sling and Social Doubles, respectively. The best in cornhole will be celebrated during Championship Saturday with the three events: World Doubles Championship, Queen of Cornhole and King of Cornhole.

About American Cornhole, LLC
Established in 2005 and headquartered in Milford, Ohio. American Cornhole Organization, the ACO, is the governing body for the sport of cornhole. Offering official cornhole rules, sanctioned products, tournament listings, and comprehensive information about cornhole events