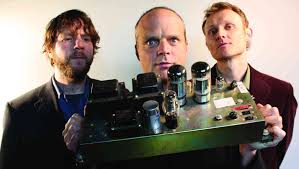 John Medeski, Billy Martin, and Chris Wood make up the renowned New York based improvisational trio known simply as MMW, by it’s fans. One of the most prolific and versatile groups to emerge from the famed ‘downtown scene’ in years, MMW have built a rabid following thanks to their relentless exploration of textures ranging from traditional acoustic jazz and post bop; to hip-hop style beats; to dance music; to space noise; to dirty funk; all with an aggressive improv-heavy approach and a level of communication that few groups attain.


They have shared the stage and studio with some of the jazz world’s most revered names, including John Scofield (a frequent collaborator), Bob Moses, Marc Ribot, and John Zorn. They’re tireless touring and fearless style of improvisation has built them a following among both the modern jazz scene and among jam-band audiences, thanks largely to their championing by the legendary jam-veterans Phish in the 90’s, exposing them to a wider audience than most of their New York peers.


They will be performing in Royce Hall at UCLA on April 26, 2013, putting on both an electric set and an all-acoustic set, displaying the true versatility of this improvisational powerhouse. Do yourself a favor and check it out!