SOMEDAY SOON, POLICE MAY REALIZE THEY'VE BEEN HAD

When Their Pension Is No More And They'll Want To Settle The Score. 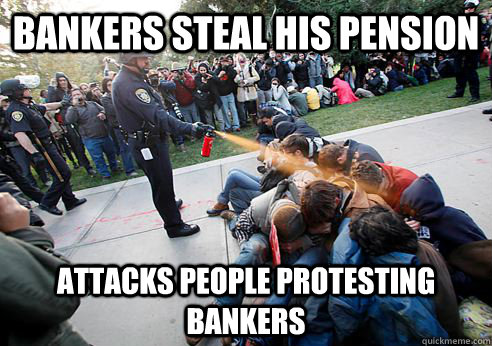 Some of the greatest economists in the world such as Max Keiser and Gerald Celente are predicting this horrific event as being inevitable in the very near future.

This is very likely happen when the bond market crashes after the Federal Reserve Bank Chairman, Ben Bernanke, announces that "Quantitative Easing" has ceased and the banks, who still need propping up, can legally steal the money and issue all pensioners an IOU. Your retirement fund will be the "Cash Cow" for the banks. Some of the banks involved are Citibank, J.P. Morgan Chase, Goldman Sachs, Bank of America, Bank of New York Mellon, State Street Bank, Wells Fargo and others. U.S. paper money will be devalued, the U.S. currency and national sovereignty will not exist and hyper-inflation will set in.

No one will be immune to this premeditated manuever-not even all the local police departments nationally, who are allegedly training to kill their fellow americans as they protect the the allegedly corrupt banksters and the politicians who allegedly sold out their country.

The primary players, the Rothschild's, Bernanke, forces the Treasury to borrow money from the Federal Reserve Bank (which they own, and is a “private corporation” that reports to NO One) and has basically piled all the debts that “THEY” created (not the American people) onto the Treasury which makes the US Corporation so far in debt that they are essentially bankrupt.  They plan to make us “sheep” pay that debt while they live like kings and use us as their slaves, but only those of us that are permitted to live.