Visit Knoxville and the ACO, American Cornhole Organization, have teamed up to bring an awareness of the City of Knoxville to the surrounding communities. 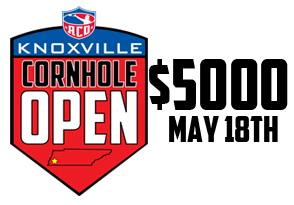 A $5,000 cornhole tournament is the draw to get visitors to  Knoxville, Tennessee. Visit Knoxville and the ACO have joined forces to make it happen. By blending heritage and family fun this should prove to be a winner.

Knoxville, Tennessee has a rich American heritage. First settled in 1786, Knoxville became the capital of Tennessee. It boasts the Great Smoky Mountains State Park, University of Tennessee and where Mountain Dew got its start. Now it will become host to the $5,000 Wild Wings Cafe ACO Knoxville Cornhole Open.

“We are excited to be bringing a first class sporting event to Knoxville. We expect this will be a huge success for our city and lead to much bigger things with ACO Cornhole in the future,” stated Jennifer Morris, Director of Sports Sales for Visit Knoxville.

Cornhole is a game in which players take turns tossing one pound bags at a raised platform with a hole in the far end. This game originated in backyards and has elevated to nationally organized tournaments and leagues. American Cornhole Organization is the governing body to the sport of cornhole and has launched a national campaign to running organized tournaments across the country.

The ACO Knoxville Cornhole Open is a $5,000 guaranteed payout of which the first place will receive $1,000. The tournament will be a doubles tournament where you and a partner will compete against other teams. Entry fee is $60 per team. The event will feature Miller promo girls from the official beer sponsor, Miller Lite and it will include a live broadcast from the Tennessee Sports Radio anchored by local celebrity Erik Ainge. Details and registration of the event can be found at www.americancornhole.com

“Knoxville is a great city to partner with. We believe the city has a lot to offer our players who will travel in from outside the state to compete. The location is great. Knoxville hits a sweet spot in the heart of ACO country. We expect over 100 teams to compete in this first year event.” said Frank Geers, President of ACO.

About Visit Knoxville: Visit Knoxville is a 501(c)(3) nonprofit, private company that works together with the community, business leaders and local and state government to further develop Knoxville as a premier leisure, meetings and travel destination. http://www.knoxville.org/

Established in 2005 and headquartered in Milford, Ohio. American Cornhole Organization, the ACO, is the governing body for the sport of cornhole. Offering official cornhole rules, sanctioned products, tournament listings, and comprehensive information about cornhole events.