How Mom and Pop Investors are Making Millions 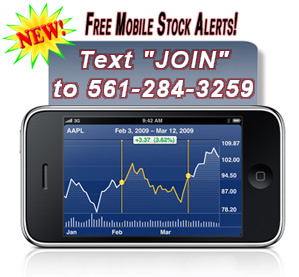 Yes Virginia, there is a Santa Claus…and speaking of free gifts, I’d like to tell you about the next breakout stock on Wall Street.

Should you ever buy any stock simply because someone says you should? Quite possibly…yes - and if it’s the right stock and the right someone --- you just might “make millions” yourself.

Many are familiar with the Battle of Little Big Horn often referred to as Custer’s Last Stand, where combined forces of Native American tribes soundly defeated the U.S. Seventh Cavalry by overwhelming them with superior numbers. Their plan for success was as effective as it was simple; attack all at once. Had the warriors attacked the soldiers one at a time that day, it would have been them wiped out instead of the soldiers - and Custer would be remembered for a great victory instead of the architect of one of history’s most infamous defeats.

This simple, yet successful formula is now being applied by small groups of investors every day on Wall Street, generating gains of 100%, 200%, 300% and more - sometimes in a single day of trading. How do they accomplish this over and over again? Ask General Custer. They all attack at once.

T.E.A.M. Together Each Achieves More. As we speak there are literally hundreds of “investor groups” out there, investing independently, while operating as a team, thanks to Internet chat rooms and investment websites, employing the same tactics on Wall Street that the combined tribes employed at the Little Big Horn - and with the same results. The strategy is simple; Organize, identify a specific target, then attack the target all at once. Victory!

Traditionally investors see their investing as a three-party system; themselves, their Broker and the Company whose stock they are investing in. But how has that plan been working out for most investors lately? Unfortunately, the same way it would have worked out for those warriors that day had they attacked one at a time. One solution is to add a fourth party to your system.

The Hard Way: Organize your own tribe, identify a target, then convince your warriors to join you in the attack.

The Easy Way: Join an existing tribe that has already identified a target, then attack what they attack when they attack it. Together Each Achieves More.

So where’s your tribe? This is the first goal for your new investing (attack) plan; find a tribe, but not just any tribe (because there are many bad one’s out there), but the right tribe that can win the battles not only with you but for you.

The first place to begin your search for the “right tribe” is to go where they can be found; on the Internet. Do an Internet search for investment groups, chat rooms and message boards, and especially stock promotion websites that have already created their own group (tribe) and have a successful system for identifying profitable stock ideas for their followers. The more participants a particular group or website has, the more power and effect they have when they move in concert in and out of specifically targeted investments. Many such organizations offer their stock ideas and analysis to the investing public for free.

How can you tell which group is the right group or has the best system and stock picks for you to profit from? Simple; track record and word-of-mouth. Or as Henry Ford once said, “You can’t build a reputation on what you’re going to do.”

Choose a group or stock picking source that has a successful track record (reputation) of proven results, then confirm those results through outside independent resources such as investor chat rooms and message boards (word of mouth).

It’s also easy to conduct your own independent research; Simply identify the exact date their recent picks have been released on - that information is usually available on their website. If it isn‘t, there may be a reason for that. Then compare the stock’s movement (or lack thereof) to the stock’s chart activity for the period that particular service released the pick to their followers. Did the stock dramatically increase in share price and/or volume starting the day it was released? Also look at the preceding days just before the release date; was there noticeable insider accumulation (front loading) just prior to the release? How long did the run up last - long enough for you to enter and exit with a profit? These are important factors in determining the reliability and viability of any stock picking sources you may be considering following.

If there is a stock picking resource out there that provides their followers with consistent winners, that news spreads like wild fire throughout the Internet investing community. If they’re making their group money and their stock picks are going up, don’t worry, they’ll be easy to find if you do a little research.

These stock picking entities will usually require you to sign up for some kind of mailing list, newsletter or some other type of alert system they use to inform their followers/members about their new stock ideas. If you feel comfortable providing them that information then go ahead, if it provides you the best and timely access to their information.

Once you have identified a qualified stock idea resource, with a proven track record and results, and you have signed up to receive their information and stock picks, do not trade their next 3 stock recommendations. Use what we call “paper trading” (trading only on paper hence the name, not with actual money) and see how your trading ability as well as how the group’s stock picks perform when working together. If the stock picks go up as touted and you make a profit on paper from the first 3 picks, then it’s probably time to start using real money. By now you’ve tested their system as well as your system for trading their picks, succeeded at it at least 3 times and are now ready to take your place among the warriors in the next attack.

Don’t get bushwhacked! Yes, the tribes achieved a great victory that day at the Little Big Horn, but they also took heavy casualties. It comes with the territory. The same is true for group investing. There are always casualties. The trick is obviously to not be one them after the dust settles. There’s always losses in this business. No one bats 1,000 on Wall Street. However, there are proven strategies for limiting risk and maximizing profits. Here’s a few tips for group investing to avoid becoming a KIA.

[1] Do not lead the attack; Leave that for those in the know; This is called pre run insider accumulation. Usually indicated by a small spike in volume and price just prior to an organized promotional campaign. The people organizing the campaign are the first to know and the first to go, followed by their friends and family, followed by their investment group. That’s just how these things work. Actually, insiders accumulating is a good sign to watch for and can be an indicator of how the stock acts in the early stages of a push - it can also be an important red flag to watch for. Insider accumulation may signal a pending run up in the stock, but too much “front loading” can actually kill or severely limit the real run up before it even begins. Future investors may see the initial increase in share price most front loading produces, figure they’re too late to join in and simply decide to take a pass even before the actual run up begins, leaving a smaller (and less effective) force to conduct the real attack.

[2] Do not follow the attack; The rule of thumb here is to think twice before “chasing” a stock that has already realized a gain of twenty percent or more before you buy it. If you haven’t purchased your shares by the time stock is already up ten to twenty percent, then it’s probably best to sit this one out and wait for the next one.

[3] Any sell in the green is a good one; In other words, greed is bad. When Baron Rothschild was asked how he made his fortunate in the stock market, he replied, “by selling too soon.” Many investors lose dollars (or more) hanging on too long in the hope of making a few extra pennies. Knowing when to retreat is just as important as knowing when to attack. What goes up - must come down…and usually a lot faster than it went up. You may hold a stock for several days/weeks waiting for it to go up a large percentage - only to see it drop that same percentage (or more) in a matter hours if not minutes. When the retreat is sounded, do not be the last one left on the battle field. You’ll never lose money selling a stock that’s going up - or as Mr. Rothschild put it, “selling too soon.”

[4] If you take your investing casually you’ll end up becoming a casualty. Most organized group investing efforts are short term plays, often lasting only a week or so, with the bulk of the group (new investors) quickly entering and exiting sometimes within a matter of days or even hours.

Stock promotion services as well as the investors that follow them know this is a fast and furious system of trading stocks. Many long term shareholders (Longs) do not follow their investments on an hourly or daily basis, like that required of short term investors (Shorts). Although shorts may play stocks that would qualify as great long term investments, they are only in it for the “short” term, realizing their profits from a brief period of increased activity in the stock. You may have several days to decide when the best time to buy a stock is, but you may only have a few minutes to decide when to sell it. You must give this unique style of trading the necessary time and attention it requires to make it work successfully for you.

The Green Baron’s next stock pick is coming soon so JOIN NOW.