Cornhole players of all skill levels will compete for multiple Titles on the sport's biggest stage this summer at American Cornhole's World Championships in Charleston. 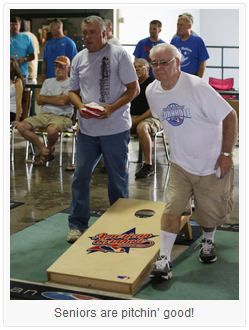 “We are very excited to be partnering with a great city, Charleston, WV, to host the ACO World Championships of Cornhole IX in July, 2014,” stated Frank Geers, President of the ACO. “This is going to be a monumental Cornhole event. The
Charleston Civic Center will be the perfect venue, and with newly added Events, and our Membership base growing daily, it promises to be a great 5 days of Cornhole.”

“The City is ecstatic to host this tournament, which is gaining in its popularity around the world,” said Alisa Bailey, President of the Charleston Convention & Bureau. “We are proud to add American Cornhole competitions to our schedule of summer activities and will be encouraging locals and tourists alike to enter and be spectators.”

The ACO World Championships is open to all players of every skill level and will feature the most coveted Title in the Sport - King of Cornhole, the crowning of the single best player in the World. Other notable Title tournaments held will
include the Queen of Cornhole, the World Doubles Championship, the King of Sling, and the World Social Doubles.

The ACO has added some great new features that will engage more players:

First, is the addition of the World Seniors Championship (a singles title), which will be open to any players 55 years old or older.

“We are very excited to be adding the Seniors Championship to this year's Worlds,” added Geers. “We have a large contingency of skilled players over 55 years of age and this will be a great start to giving them more opportunities to compete, as well as attract new seniors to our sport. Now that they have their own title.”

Richard Stone, a long time ACO-PRO player who will be competing in the King of Cornhole and the World Seniors Championship added, “Finally one of us old geezers will finish number one!” All kidding aside, the Seniors Championship will feature all the thrills of top-notch play.

Second, the ACO will expand the final King of Cornhole bracket and the World Doubles bracket to include ACO State Champions.

“The ACO State Championships is a new annual program that we're proud to introduce,” said Eric Hinerman, Director of Certified Officials for the ACO. “Our points earning Season ends in May, and from now on, the month of June will be designated for all ACO State Championship tournaments. This is a great opportunity for players because all Singles and Doubles State Champions will win Golden Tickets to the Worlds, ACO State Champion Jerseys, and most importantly,
they will automatically bypass the Qualifying rounds at the Worlds and be placed directly into the King of Cornhole and/or the World Doubles brackets.” he added.

ACO officials expect to have 500+ players from 20+ States participating in the 5 day event.

For more information and to learn how you can you can participate, visit AmericanCornhole.com

About American Cornhole, LLC
The American Cornhole, LLC was established in 2005 and headquartered in Milford, Ohio. American Cornhole Organization (ACO) is the governing body for the sport of cornhole, offering official cornhole rules, certified products, tournament listings, comprehensive information about cornhole events, and an ACO Certified Official Program that brings awareness of the sport to localized markets. www.americancornhole.com

About The Charleston CVB
The  Charleston Convention & Visitors Bureau inspires and grows the city’s economy through tourism expenditures, thus enhancing the quality of life for Charleston’s citizens and businesses. Hip, Historic…Almost Heaven promotes
Charleston as a destination that embodies the aspirations of the creative class, absorbs historic architecture and neighborhoods, and differentiates the city from other destinations.  www.charlestonwv.com