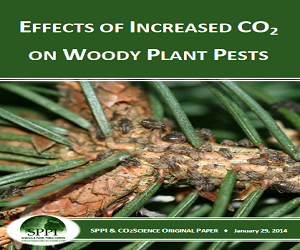 Insect pests have greatly vexed earth's trees and shrubs in the past; and they may continue to do so in the future. But the question arises: Will the anticipated increase in the atmosphere's CO2 content exacerbate, ameliorate or have no effect on this phenomenon? In the paragraphs below, the results of several studies that address this important question are described and discussed, as they pertain to woody plants other than oak and maple trees, which are addressed separately in similar reports.

Docherty et al. (1997)  grew beech and sycamore saplings in glasshouses maintained at atmospheric CO2 concentrations of 350 and 600 ppm, while groups of three sap-feeding aphid species and two sap-feeding leafhopper species were allowed to feed on them. Overall, they reported that elevated CO2 had few significant effects on the performance of the insects, although there was a non-significant tendency for elevated CO2 to reduce the individual weights and populations sizes of the aphids.

One year later, in a study that did not involve herbivores, Gleadow et al. (1998 ) grew eucalyptus seedlings in glasshouses maintained at 400 and 800 ppm CO2 for a period of six months, observing biomass increases of 98% and 134% in high and low nitrogen treatments, respectively. They also studied a sugar-based compound called prunasin, which produces cyanide in response to tissue damage caused by foraging herbivores. And although elevated CO2 caused no significant change in leaf prunasin content, it was determined that the proportion of nitrogen allocated to prunasin increased by approximately 20% in the CO2enriched saplings, suggestive of a potential for increased prunasin production had the eucalyptus saplings been under attack by herbivores.

Simultaneously, in a study of simulated herbivory, Kruger et al. (1998)  grew seedlings of oneyear-old maple (Acer saccharum) and two-year-old aspen (Populus tremuloides) trees in glasshouses with atmospheric CO2 concentrations of 356 and 645 ppm for 70 days. At the 49day point of the experiment, half of the leaf area on half of the trees in each treatment was removed; and this defoliation caused the final dry weights of both species growing in ambient air to decline. In the CO2-enriched glasshouse, on the other hand, the defoliated maple trees ended up weighing just as much as the non-defoliated maple trees; while the defoliated aspen trees ended up weighing a little less, but not significantly less, than their non-defoliated counterparts. Hence, atmospheric CO2 enrichment helped both species to better recover from the debilitating effect of leaf removal, which suggests that these trees may be better able to deal with the physical damage that might be inflicted upon them by herbivores in a future world of higher atmospheric CO2 concentration.