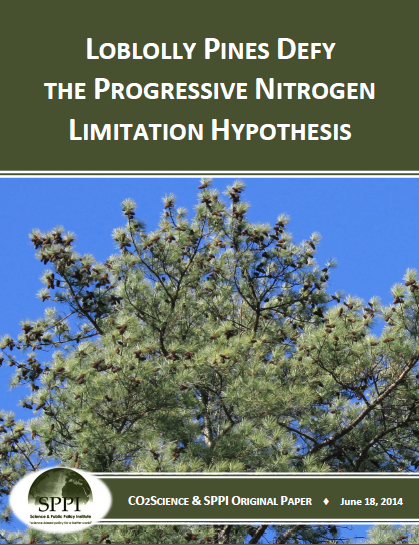 As part of one of the most outstanding of such studies ever to be conducted, Finzi and Schlesinger (2003)[1] measured and analyzed pool sizes and fluxes of inorganic and organic nitrogen in the forest floor and top 30 cm of mineral soil during the first five years of differential atmospheric CO2 treatment of a stand of initially 13-year-old loblolly pine trees at the Duke Forest FACE facility in the Piedmont region of North Carolina (USA), where half of the experimental plots were maintained at an atmospheric CO2 concentration approximately 200 ppm above ambient. Based on these Under these conditions, they found that the extra CO2 significantly increased the input of carbon (C) and nitrogen (N) to the forest floor, as well as to the mineral soil findings, they actually in which the trees were growing. However, they reported "there was no statistically significant change in the cycling rejected their own rate of N derived from soil organic matter under elevated CO2" and that "neither the rate of net N mineralization nor original hypothesis, gross 15NH4+dynamics were significantly altered by elevated CO2." In fact, they could find "no statistically significant which was essentially difference in the concentration or net flux of organic and inorganic N in the forest floor and top 30-cm of mineral soil the same as the PNL after 5 years of CO2 fumigation," adding that "microbial biomass was not a larger sink for N." And based on these hypothesis. findings, they actually rejected their own original hypothesis, which was essentially the same as the PNL hypothesis, i.e., that the extra CO2 provided to the experimental plots would significantly increase the rate of nitrogen immobilization by the soil microbial communities found within the CO2-enriched FACE arrays and thereby lead to a lack-of-N-induced reduction in the magnitude of the growth stimulation that was initially manifest in the CO2-enriched treatment.