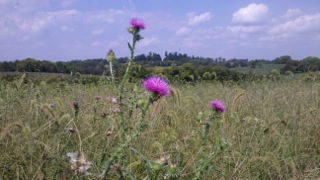 “Yankee Doodle Dandy was sung in slur by British officers,” opened Bryan W. Brickner of Ew Publishing, “that is, until the Spirit of ’76 started singing.”

In honor of the rebel Yankee Doodle Dandy and the Spirit of ’76, the Ew Publishing summer series War Cry Heal Union (WCHU) addresses American sacrifice and the revolutionaries via the New York Battle of Harlem Heights, 16 September 1776.

Hosted on the Bryan William Brickner Blog, the ninth installment of the WCHU series, 1776: Gus Kotka, Johnny Reb and the Dandies of Harlem Heights, examines revolutionaries in rebellion (and battle). In a “spirited” dialogue between two Civil War soldiers, Augustus (Gus) Kotka and the composite character Johnny Reb, the American tradition of rebellion (Yankee Doodle Dandy) is honored through the deaths of two revolutionary soldiers, Thomas Knowlton and Andrew Leitch.

“Yankee Doodle Dandy began as a smear song – one mocking Americans,” noted Brickner; “this was prior to the rebellion, during the 1750s, when the colonists were supporting Britain’s war with the French monarchy: the so-called Seven Years’ War.”

“The Brits made fun of the colonial militias,” Brickner continued. “When the colonies rebelled, the American’s took the song to heart and made it their own.”

“Thomas Knowlton of Connecticut and Andrew Leitch of Virginia,” followed Brickner, “were original Yankee Doodle Dandy rebels, the kind of Americans that defined (made) the Spirit of ‘76.”

“Today’s Unrepresented are 21st century Yankee Doodle Dandies,” closed Brickner, “which means We the People have quite a bit of heritage … to build on.”

Brickner has a 1997 political science doctorate from Purdue University and is the author of several political theory books, to include: The Promise Keepers (1999), Article the first (2006), and The Book of the Is (2013). The Bryan William Brickner Blog is an ongoing resource for the political science of constitutions and the biological science of receptors.