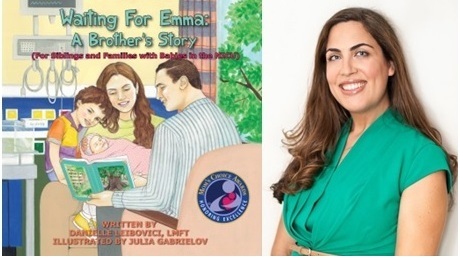 Award-winning children’s author, Danielle Leibovici, LMFT, has written and released #1 Amazon best-selling children's book “Waiting for Emma: A Brother’s Story” (For Siblings and Families with Babies in the NICU). This month begins Leibovici's campaign with the Children's Hospital of the King's Daughters in support of their Neonatal Intensive Care Unit and the families they serve.

In honor of National Neonatal Intensive Care Unit Awareness Month, 100% of net proceeds from book sales will be donated.  Books can be purchased and donated directly through CHKD, Amazon, Barnes and Noble, select retailers and signed copies are available through author's website.

After her own daughter sought treatment in the NICU at CHKD, Leibovici was asked by their medical community to create a children’s book in support of all family members with a preemie or newborn in the NICU. "It gives me great satisfaction that from such a dark time in our family's life, this beautiful book is here to touch and support the very families it was written for. A true full circle moment. Now with this special book and campaign with CHKD, families benefit, and the NICU benefits. It’s a win, win!”

Edward Karotkin, MD, a Professor of Pediatrics and a neonatologist at CHKD, raves; “...An exceptionally written and realistically illustrated children’s book available today for siblings and families with NICU babies. The sensitivity, support, and useful resources for all family members, are invaluable. Bravo! Thank you, Danielle Leibovici.”

Heather Wilson, NICU mother, shares, “I didn’t even realize the impact the NICU experience had taken on each of us. Joey, my son, completely opened up about his feeling after reading this book. I also learned that by not sharing my feelings, I was not leading by a good example. We are grateful for a book like this!”

"Waiting for Emma: A Brother’s Story” received the Seal of Excellence from the Mom’s Choice Awards and has taken the Bronze Medal for Best Children's Book in Non-Fiction, from Reader’s Favorite.

Danielle’s recent campaign was held in July at the Pasadena Public Library benefiting the Institute for Families of Los Angles, CA; a charity supporting babies, children, and families with visual impairments.

For more information on this current campaign and to purchase “Waiting For Emma” visit http://DanielleLeibovici.com/making-a-difference

Danielle Leibovici was born and raised in Los Angeles, California. She is a licensed marriage family therapist, speaker, campaign fundraiser, and mom of three. "Waiting for Emma" is Leibovici's fourth title in her multi award-winning, best-selling, Under The Tree Children's Series.

Other titles include:
“If You Love Me So Much,”
“Under The Tree,” and
“With You Always.”

In addition to The Seal of Excellence from Mom’s Choice Awards, the series has received First Place Honors for Best Children's Books from Royal Dragonfly Awards and Purple Dragonfly Awards, as well as four medals from Readers Favorite. She is one of the Author Show’s Fifty Writers You Should Be Reading.  Leibovici's experiences as a psychotherapist and parent have inspired her speaking engagements, children’s books, and fundraising campaigns.