From sea to shining sea, the United States is home to beautiful landscapes, historic treasures, and shimmering oceans that all Americans can enjoy. 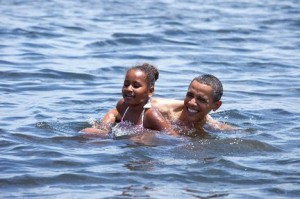 From sea to shining sea, the United States is home to beautiful landscapes, historic treasures, and shimmering oceans that all Americans can enjoy. President Obama recently announced his plan to help every kid enjoy the great outdoors. Starting this fall, every 4th grader will get a one-year pass for free admission to National Parks and other federal lands and waters. Today, we honor the United States presidents who have donned wetsuits or at least drafted environmental protective legislation, above or below sea level.

President Obama Prior to his resignation in 1972, President Richard Nixon enacted the Marine Mammal Act; which has been responsible for protecting many species for over 40 years.  Some say the vistas from his San Clemente “Western Whitehouse” inspired the law.

Our greatest presidential contributor would have to be the conservation visionary himself, President Teddy Roosevelt.  He is responsible for establishing the United States Forest Service, which resulted in the protection of nearly 200 million acres of land. In addition, He initiated the National Wildlife Refuge System to protect endangered wildlife and was responsible for passing many conservation laws and policies. Roosevelt was the first president to make conservation a national issue that lives on today.

President Teddy Roosevelt was the consummate sportsman and lover of the outdoors. To help maintain his physical toughness & resolve, He would take frequent skinny dips in the turgid, frigid waters of the Potomac.

We have a few more presidents who may not have been quite as athletic, but still loves our Oceans and waterways. President Clinton & many others have enjoyed snorkeling with their families in spots such as Hawaii’s Hanauma Bay, where President Obama, too, takes his family nearly every year.

It should not be denied that being outdoors, whether on land or sea, has always exhilarated us. It is associated in our minds with freedom and an escape from life’s less thrilling obligations. We appreciate the honorable United States Presidents who have acted to protect our seas and conserve our environment to help keep America beautiful.