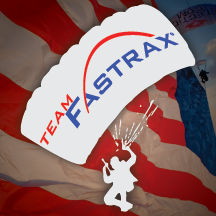 On December 10th, 2015 in Doha, Qatar, Team Fastrax™ member Larry Compton performed on behalf of the LEKHWIYA Skydiving Team from the State of Qatar, exiting an AW139 helicopter from an altitude of 7,500 and at 3,500 feet above ground level. He safely deployed and flew the National Flag of the State of Qatar in honor of the Emir of the State of Qatar, Sheikh Tamim bin Hamad bin Khalifa Al Thani.  The World Record setting flag was flown under a custom-made 400sq. ft. red parachute with the gold LEKHWIYA logo on the bottom skin of the parachute.  The flag itself was built to the official national ratio of 11:28.  It is maroon with a broad white serrated band (nine white points) on the hoist side.  Qatar's flag is the only national flag having a width more than twice its height.

John Hart, founding member of Team Fastrax™ said, "It was absolutely breathtaking to watch Larry exit the aircraft and deploy the flag.  After months of development, sewing, training and testing, to have it successfully deploy and fly was overwhelming.  It was majestic, flying around the flag and documenting this world record performance, made all the preparation worthwhile. LEKHWIYA did what most would think is impossible.”

The LEKHWIYA Skydiving Team was training with Team Fastrax™ at Start Skydiving in Middletown, Ohio, in preparation of their National Day performance on December 18th, 2015.  So that all of Qatar was able to see the beauty of this flag, it was flown and televised live from LEKHWIYA Stadium on December 10th, 2015.

Location of the jump: Doha, Qatar