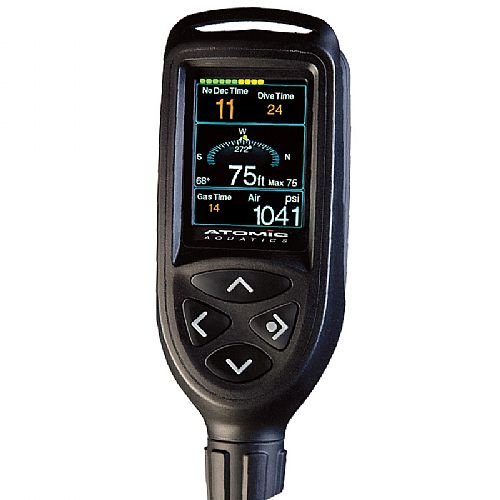 I’ve been doing this a long time.  Over the years I’ve seen items come and items go.  I’ve found myself buying into the hype over new products more than once that would never actually see the light of day.  I’ve anxiously awaited everything from lights, to regulators to rebreathers that made for really snazzy pictures, but were quietly filed away before a diver ever had the chance to buy one.  Many have been the sales rep to come in and tell me that their company’s new regulator was going to change the way we breathe underwater.  The excitement and anticipation would overwhelm me, only to come crashing to earth once I got one into my hands and see the same old engineering that’s been perfected by just about every scuba equipment manufacturer on the planet over the years.  Any more I’ve become callous and jaded to this, pretty much convinced that there just isn’t anything to get excited over any longer when it comes to “new” scuba gear.

That all changed recently when our Atomic Rep came to call.  He wouldn’t show me what was in his bag only teasing me that I was going to like it.   He took his time, asking how business was, how the family is doing, asking if I had any issues or questions regarding Atomic or their product line.  About the time I was done and over it all he pulls out a console from his bag.   At first it looks like just another computer console.  About the same size and shape as others already on the market, although the large buttons do catch one’s eye.  They are laid out with a guy in mind.  Like a DVR remote control!  Up, Down, Right and Left.  Simple!  What a concept!  And what’s more, the computer operates with that same principle in mind.  Scroll up and down to choose the category, press right to enter a mode, and left to leave it.  Just like my DVR.  And what’s more, they are magnetic buttons that do not penetrate through the case, making them leak-proof!

\The next thing you notice is near impossible to miss.  The screen on this dive computer is the first extremely high contrast OLED (organic Light Emitting Diode) screen on the market and is vivid and bright and as clear to read as any personal computer or smart cell phone!  It is colorful and offers amazingly high contrast being set in front of a black background.  Far and away the easiest to read screen of any dive computer I’ve ever seen!  To top it all off, the illumination is user changeable to your taste or diving conditions.  You can make it brighter or dimmer to suit your vision needs.  It is laid out in a very common sense layout that is very user friendly and intuitive.

At this point, my curiosity is pretty well piqued.  I’m impressed but not overwhelmed.  Computers are expensive and I have a nice one that I like.  Nothing I’ve seen yet says “I have to have this!”  That is, until we started playing with the features.  The High Pressure Quick Disconnect that comes standard on the unit is unique in how it screws into place and locks.  Very secure but very easy to use.  It has a built in, rechargeable Lithium ion battery that will last between 40 and 60 hours of diving before needing a charge, and even though it is a manufacturer service to have the battery changed, it is designed to last several years before needing this service.  The best thing about Lithium ion batteries is that they don’t get a memory.  You can charge and recharge as you need.  No more making sure you discharge the battery completely before recharging in order to maintain optimum battery life.  The next fun surprise is that the battery can be charged using either the AC adapter included with the computer or by using your own PC or Laptop with the included USB cord!

The software this computer uses allows for just about anything any diver, from the newest open water diver to the more advanced technical diver would want.  It has a pre-dive planner that will let the diver simulate and pre-plan just about any dive, including repetitive diving, as well as diving over multiple days such as on a vacation or a dive weekend.  The log book is immense, storing up to 600 hours of diving in a very detailed dive profile.  It is not only air/nitrox compatible up to 99% oxygen, but you can pre-program up the 3 different gas mixtures and switch between gasses underwater during your dive!  This allows for changing from main cylinders to pony bottles filled with deco gasses or even separate bottles of different nitrox mixtures.

Finally on top of the all the regular features a diver would want in their dive computer, such as time to fly, automatic altitude adjustment, customizable options and alarms, and a generous operating depth, you get one of the most intuitive digital compasses ever placed on a recreational diving computer!   Simple, easy to use, program and read, it will even perform track back functions allowing you to retrace your route back to your starting point!

Over all the Atomic Cobalt computer is one of the first pieces of scuba equipment I’ve seen in quite some time that really has that “Wow!” factor.  The people at Atomic have found a way to pack a really large punch into a relatively small package and for the first time in many years, a new piece of dive gear that I don’t need, but feel I have to have!  I don’t think it lives up to any of its hype at all, but rather over shadows its hype offering a complete package of features that description alone cannot do justice.