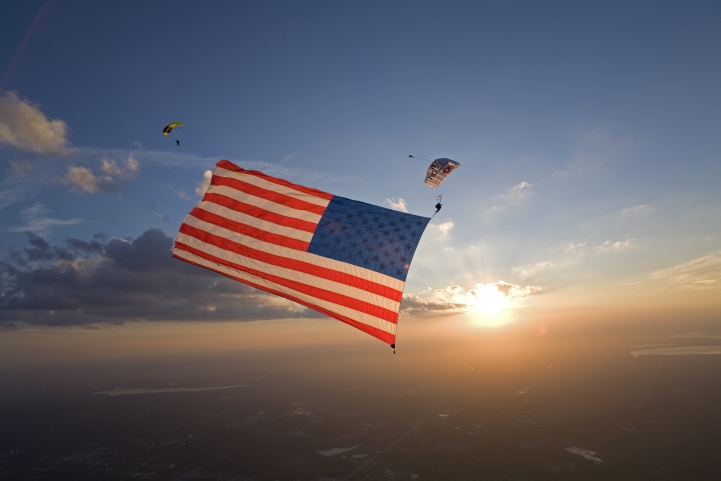 Broad Street Blast is located in Smith Park, Middletown, OH.  At 5pm Team Fastrax™ will be performing their famous American Flag skydive with a 7,800 sq. ft. American flag as well as three 150 ft. red, white and blue streamers.   To top it all off, at 9:00pm, just prior to the main fireworks start, Team Fastrax™ will be performing their much anticipated pyro jump.  Five skydivers will exit the aircraft with fireworks strapped to their legs, and will freefall down in an amazing aerial display.

John Hart, owner of Start Skydiving, and member of Team Fastrax™, said “We are honored to be performing our American Flag and pyrotechnics skydives to celebrate such an important day in America’s history.  The Declaration of Independence and our resulting freedoms are what truly set us apart from other countries.  We are particularly glad to be able to celebrate this special day with all of the residents in our hometown.  God Bless America.”

According to their website, this is the second year the City of Middletown and the Broad Street Bash Gang have hosted the Middletown fireworks display.  There will also be food trucks, drink tents, music and more.  Free parking will be available at Smith Park (come early - spots filled quickly last year!) and admission is free as well.  It all takes place at Smith Park in the heart of Middletown, just off N Verity Pkwy, N Main St, adjacent to Middletown Regional Airport.

Team Fastrax™ is sponsored by SELECTiON.COM®, a leading provider of criminal background checks and pre-employment screening services.   Team Fastrax™ is the most ambitious professional skydiving team in the world.   The parachute demonstration team has a roster of more than twenty-nine active members, with a collective of more than 300,000 skydives.  Team Fastrax™ has performed exhibition skydives all over the world for audiences large and small as a patriotic display or as a product promotion.