Why former Pope Benedict xvi should be punished 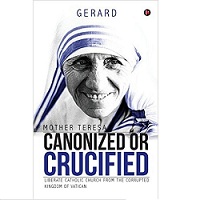 The author Gerard, through this book, published by Notion press, presents some real reasons why a group shows double standards in giving sainthood to Mother Teresa and also makes attempts to defame her in the international arena. According to the Catholic Canon Law, the sacramental seal is not to be broken or dishonored by a confessor in any way. The author feels that just like how Roman Journalists, who revealed the Vatican scandals by publishing the Pope's secret documents were arrested, former Pope Benedict XVI, Catholic priest Brian Kolodiejchuk and a few Catholic cardinals should be punished for publishing the confession letters of Mother Teresa, even though she has mentioned in all letters to destroy them.

According to the Canon Law, the priests may not reveal what they learn during a confession. When the law is breached, even the Pope can be brought to punishment. The breaking of the sacramental seal is perhaps the first in the history of the Catholic Church. Through this breach, the Church tries to defame her. But the author brings you the real reasons behind the issue. To know more, grab a copy of your book today - Mother Teresa Canonized or Crucified?

Gerard is a Catholic Christian. He worked as a teacher in a Catholic institution. He has participated in so many agitations conducted by teachers associations and was imprisoned. He is writing social essays nowadays. He is also a spiritual thinker and wisher of reasonable changes in the Catholic Church.