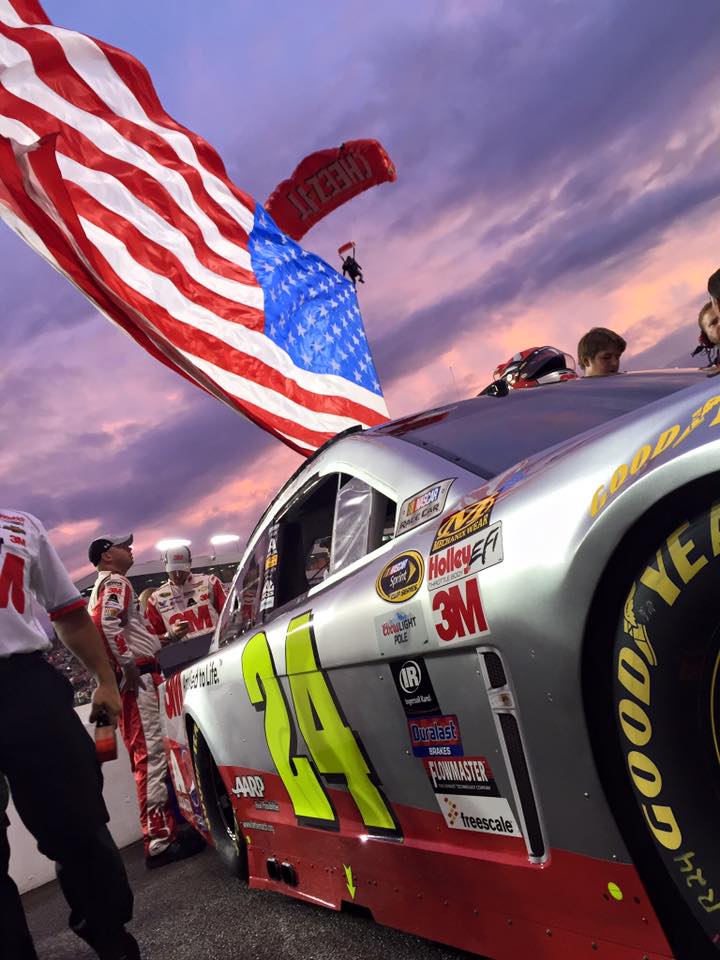 The stars of NASCAR return to Michigan International Speedway, both in the air and on the asphalt, as the NASCAR Sprint Cup Series heats up during the Pure Michigan 400. Defending race winner Matt Kenseth along with Kevin Harvick, Joey Logano, Kurt Busch, Brad Keselowski and all of the stars of the NASCAR Sprint Cup Series, will battle it out for the checkered flag, as the Chase draws near. Just prior to the National Anthem, Team Fastrax™ will perform an amazing aerial display with 1,000 sq. ft. Ford, Toyota and Chevrolet flags.

John Hart, owner of Start Skydiving, and member of Team Fastrax™ said, “We are honored to be performing at such a thrilling event. The Pure Michigan 400 is a very competitive race, and with only a few races left before the Chase, it’s sure to be an exciting weekend.”

According to their website, this year’s NASCAR Pure Michigan 400 will include freestyle MX shows, two Tim Dugger performances and a Drake White and The Big Fire concert. Also included in the weekend, will be the Cooper Standard Careers for Veterans 200, on Saturday, August 27th. It’s sure to be a weekend you won’t forget.

Team Fastrax™ is sponsored by SELECTiON.COM®, a leading provider of criminal background checks and pre-employment screening services.  Team Fastrax™ is the most ambitious professional skydiving team in the world.  The parachute demonstration team has a roster of more than twenty-nine active members, with a collective of more than 300,000 skydives. Team Fastrax™ has performed exhibition skydives all over the world for audiences large and small as a patriotic display or as a product promotion.

For more information on the race, or to purchase tickets visit the Michigan International Speedway website.