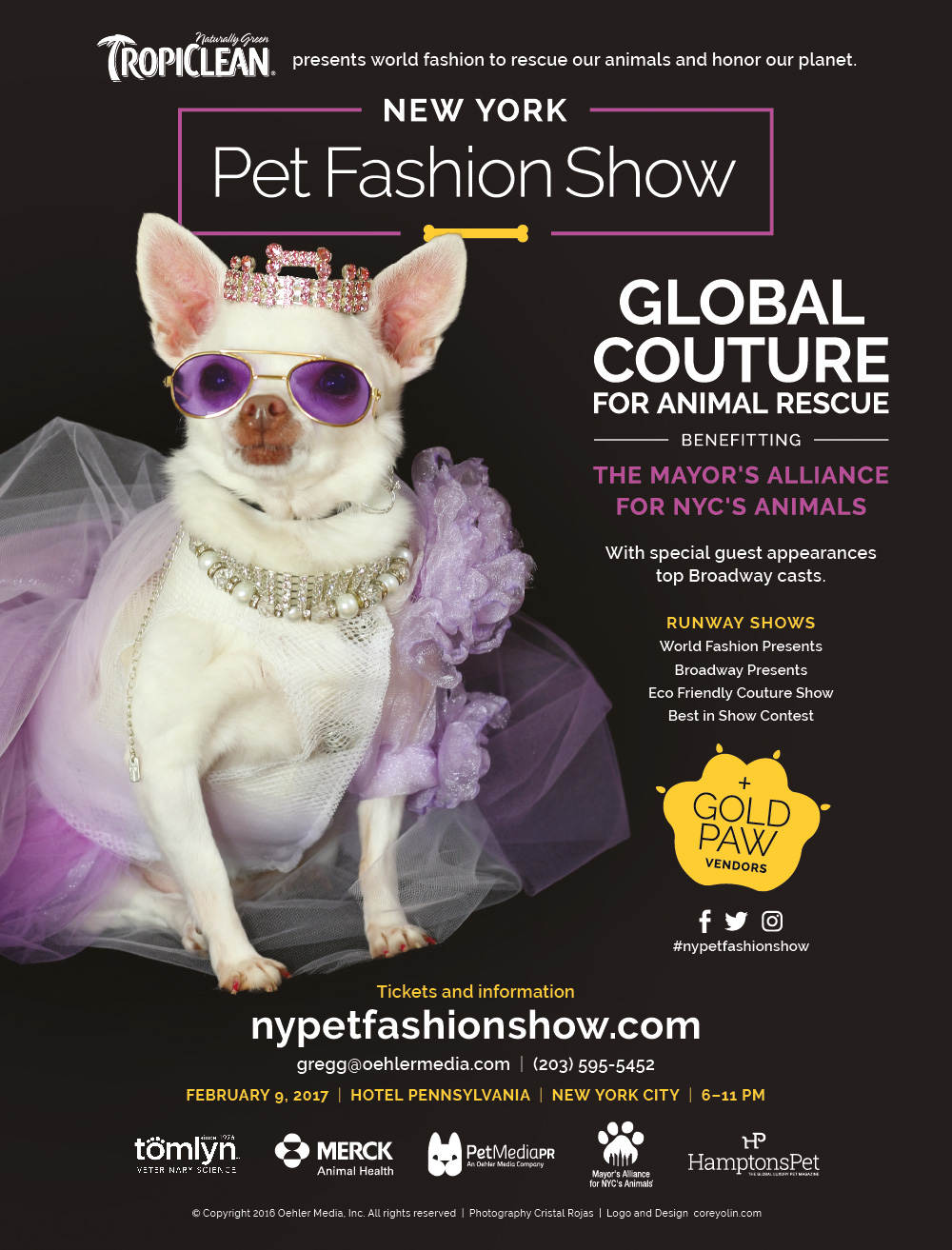 Welcome to the 2017 New York Pet Fashion Show Presented by TropiClean. This year’s theme is “Global Couture for Animal Rescue”, and features World Fashion to Save our Animals and Honor our Planet. The show is a celebration of our love for animal rescue which helps save animals' lives, and will benefit The Mayor's Alliance for NYC's Animals and their 150 participating shelters and rescue groups.

The NY Pet Fashion Show is honored to have Merck Animal Health, Tomlyn, and Hamptons Pet magazine as this year’s Best in Show sponsors..

This year's host and MC is Celebrity Pet Expert Harrison Forbes, and the Gold Paw awards will feature Beth Shak-Levenathal as the 2017 “Humanitarian” award winner.

The 14th annual New York Pet Fashion Show Presented by TropiClean kicks off Westminster Weekend and Fashion Week. The 2017 theme is “Global Couture for Animal Rescue”, and is being held on Feb 9th 2017 at the Hotel Pennsylvania in NYC. Celebrities and animal rescue stars will be walking the runway. The runway will feature Rachel Grant, a “Bond Girl” from Die Another Day, and Bravo’s Tour Group, along with actress Naomie Olindo from Bravo's "Southern Charm, and Urban Animals Robbyne Kamil.

Chairman, Gregg Oehler invites the media to cover the event of the season, which is the Super Bowl of fashion and rescue. The show averages 600-800 people in attendance, with over 100 media covering the event. This event will be filmed for TV, and features three runway shows directed by world renowned pet fashion designer and the shows Co-Chair and creative director Ada Nieves. The show will feature must see top pet fashion designers from across the World showcasing their couture collections!

New York City is the Capital of the world in media, fashion, finance, and is now the dog, cat, and animal rescue capital of the world. See the top pet designers from across the globe and their creations, with cats, dogs, chickens, rats, and a bearded lizard on the runway.

Media:
To be placed on the VIP Media Guest list or contact for interviews: Gregg(at)OehlerMedia(dot)com or call 203-595-5452

To Purchase Your NYPFS Ticket(s) click the link below
http://nypetfashionshow.com/index.php?id=buy-tickets