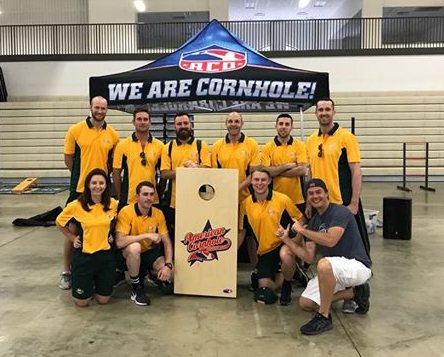 American Cornhole, the ACO, brought international flare to its 13th World Championships of Cornhole in Montgomery, Alabama, July 24-28 this year, as a selected Team of Aussies signed-up to compete for the King of Cornhole Crown.

Multiplex, an international building company, with facilities in Britain, the Middle East, India, and Australia, having 50,000 plus employees worldwide, committed to a very special goal.

Starting as a whim, a member of the Multiplex Management Team in Australia saw a Board and Bag Tossing Game on TV and thought the game would be a good way for Multiplex employees to connect. Considering the number of different disciplines in the company, it seemed to be a way to break down boundaries, have fun, and get a team to the States for world cornhole competition.

With the help of one of its local contractors, Multiplex had cornhole boards made to specs, and called on the ACO, in the States, to ship regulation cornhole bags and Sport Cornhole Rules to them.

The concept took hold. Men and women both were getting involved. Cornhole was played on new building tops, open construction areas, inside buildings, regardless of the environment; Multiplex was practicing a new sport – cornhole.

Soon Multiplex Australia was having competitions in many parts of Australia. Players were not only enjoying the social benefits of cornhole, but were improving their skills. The goal now was to get to America for the ACO World Championships of Cornhole in July, 2018.

Within several months, the interest of cornhole grew from not knowing anything about cornhole to genuine enthusiasm for the sport and a quest for the ACO Crown.

After a multitude of tournaments and competitive fun, Multiplex had chosen eight of the best cornhole players to represent it at the ACO World Championships of Cornhole 13 in 2018. The competition is in Montgomery Alabama, July 24-28 at the Cramton Bowl.

Cornhole appears to be taking off in Australia, and the ACO is there for long term  competitive goals.

Follow the Aussies Live in their quest for the ACO Cornhole Championship Crown 13 at www.WeAreCornhole.com