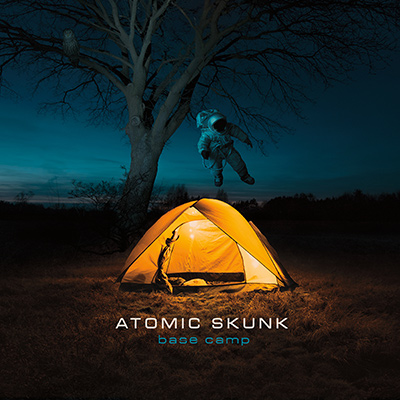 Atomic Skunk made a splash on the ambient electronic scene in 2009 with the release of Binary Scenes, garnering high praise from electronic music fans, bloggers and ambient music stalwarts such as Hearts of Space producer, Stephen Hill and Echoes Radio producer, John Dilberto, who described the music as "note perfect ambient, full of mood, unusual dreamstate shifts and psychedelic edges." Echoes Radio listeners voted Binary Scenes one of the "Top 200 CDs of the last 20 Years." Portal was a featured album on numerous, legendary ambient music radio programs such as Hearts of Space, Echoes Radio, SOMA FM, Musical Starstreams and Radioio Ambient. Echoes Radio listeners voted it into the Top 25 for the "2010 Best of Echoes Radio" listeners poll, while the staff of Echoes Radio featured Portal as one of their "25 Essential Echoes CDs for 2010."

Like Portal and Alchemy, Base Camp will be released on all major platforms, but a "gapless" version of the album (each track flows into the next) will be available only at https://atomicskunk.bandcamp.com. There will also be a very limited edition 6-Panel Digipak CD with artwork by Michal Karcz available. Pre-orders begin June 7 with a release date of June 21, 2019.