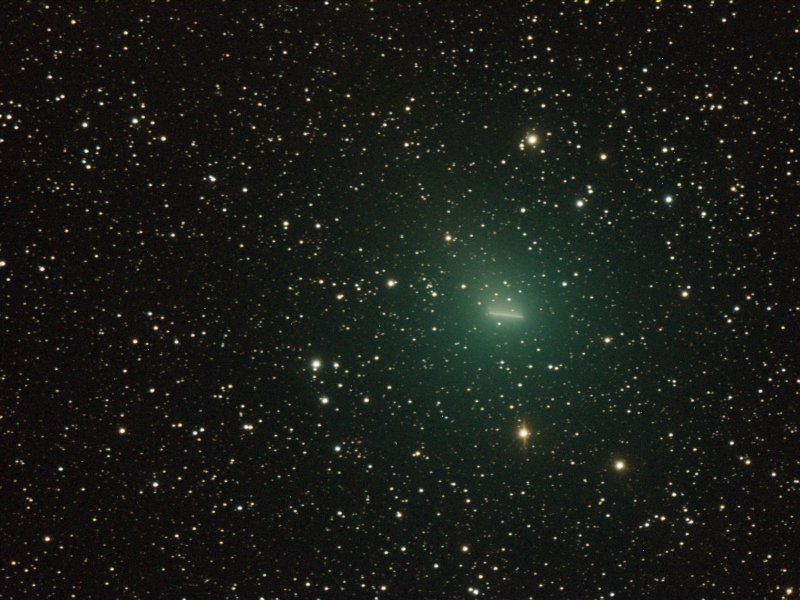 Hi There! I'm Ian, some of you may know me from my other blog, astroblog, or from the STEREOHUNTER group, or merely as that annoying guy who logged into GRAS 14 just as you were planning to.

Over at astroblog I largely guide people to the view of the sky as seen with the unaided eye. But I'm also a GRAS user, and I'm very honoured to have been invited to highlight some of the interesting objects that can be seen through the GRAS telescopes.

While many people are familiar with the comets larger, more showy objects in the night sky that make good GRAS targets, there are a host of lesser known, interesting objects that are well worth seeing, and one off events like comets passing nebula or clusters. Not that I am obsessed with comets or anything.

I may also give out some hints about using GRAS scopes, provided you are willing to take advice from someone whose main imaging system is a modified webcam, and who thinks a flat field is a good place to play soccer.

The object that is taking many GRAS users attention at the moment is comet 103P/Hartley 2.

Comet 103P is a great target, as it is quite bright (at least magnitude 6, and may get as bright as magnitude 4.5. It has a faint greenish cast to the coma, which is good in colour exposures and is a nice target for making animations as it moves across the sky.

But from the point of view of GRAS users, probably the most interesting element  is the variety of clusters it will approach during October.

103P is currently in Perseus, near eta Persii, it rapidly heads towards Capella in Auriga, then by the end of the month enters Gemini. For most of the month the comet is best imaged using the northern hemisphere scopes, with the best scope being the wide field G14 instrument.

On 19 October the comet is near the bright open cluster Cr62, in another rich field. On tthe 21st M 38 and NGC 1907 are in the frame, then on the 23rd M 37 is close by.  Unfortunately, after the 20th the Waxing Moon will significantly interfere with imaging the comet before then, if you can stay awake long enough, the Moon sets before astronomical twilight.

Still, there will be lots of opportunity to get some nice images, go to it!