SPPI Book Presents the Many Benefits of Atmospheric CO2 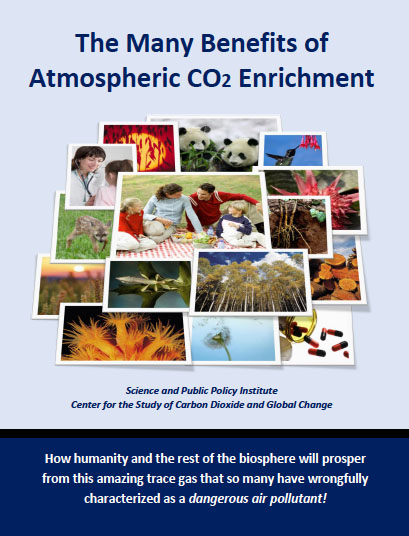 The Science and Public Policy Institute has released a ground-breaking book chronicling the many benefits of atmospheric CO2 concentrations.  The 55 benefits discussed are drawn exclusively on the peer-reviewed literature.

Many books and reports rail against mankind's usage of fossil fuels such as coal, gas and oil because of the carbon dioxide or CO2 that their combustion releases into the atmosphere.

Indeed, this phenomenon is routinely castigated in numerous print and visual venues as a result of the unproven predictions of catastrophic CO2-induced global warming that are derived from theoretical computer-driven simulations of the state of earth's climate decades and centuries into the future.

Now, however, comes a book that does just the opposite by describing a host of real-world benefits that the controversial atmospheric trace gas provides, first to earth's plants and then to the people and animals that depend upon them for their sustenance.

The book is The Many Benefits of Atmospheric CO2 Enrichment, written by the son/father team of Craig D. and Sherwood B. Idso.  It is encyclopedic in nature, with fifty-five different subjects treated and arranged in alphabetical order -- starting with Air Pollution Stress (Non-Ozone) and ending with Wood Density -- each of which entries comes with its own set of reference citations.

The book is subtitled How humanity and the rest of the biosphere will prosper from this amazing trace gas that so many have wrongfully characterized as a dangerous air pollutant.

Says Dr. Craig Idso, “It may not be everything you ‘always wanted to know’ about the bright side of the issue; but it illuminates a number of significant aspects of earth's biosphere and its workings, as well as mankind's reliance on the biosphere for food and numerous other material necessities that are hardly ever mentioned by the UN IPCC or the mainstream media.”

The book is so unique a reference source that it belongs in the library of every organization or institution concerned about the issues of CO2 enhancement and derived public policy initiatives.

Brief synopses of each of the 55 sections of the book may be found on the SPPI [scienceandpublicpolicy.org] website and that of the Center for the Study of Carbon Dioxide and Global Change at www.co2science.org

The book can be ordered from Vales Lake Press,  http://www.valeslake.com/bookmart.htm