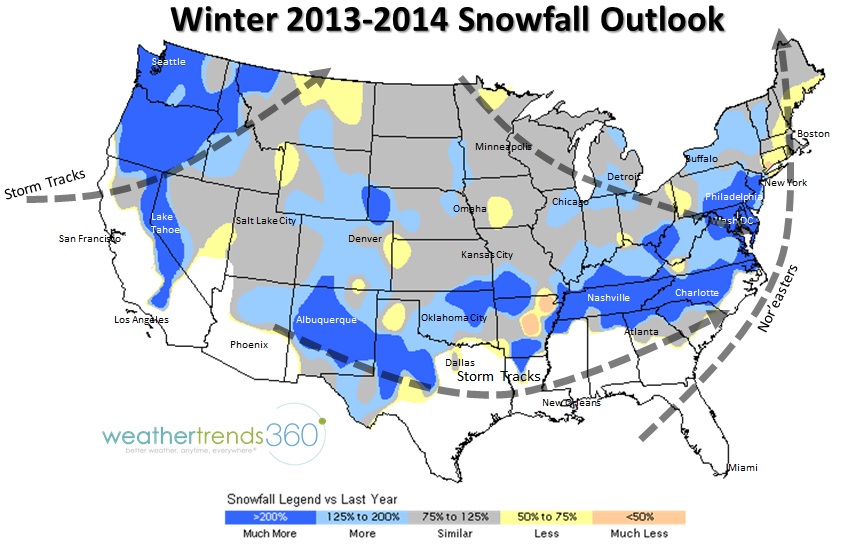 Are you ready for a nasty winter in the Eastern U.S.?  The statistics and climate index similarities suggest the 2013-2014 winter will be similar to 1962-1963 which brought the 6th coldest January in over 118 years and copious amounts of snowfall.  The factors considered were a proprietary statistical forecasting technique, Atlantic Accumulated Cyclone Energy index, ENSO neutral phase, 30-year cold intensifying Pacific Decadal Oscillation Cycle and a very weak 100 year solar cycle which all point to a winter similar to 1962-1963.  Based on that mix of leading indications, we’ve outlined our TOP 10 facts and predictions for the upcoming winter:

1.      Nor’easters will be much more frequent this year bringing the snowiest winter in 3 years with 35% more snow than last year and much above average.  (see national snowfall trends map).

2.      Temperatures across the Eastern half of the country will trend 3-6 degrees colder than last winter making it the coldest winter in 3 years with below average temperatures.  (see national winter temperature map).

4.      The West will trend the warmest in 4 to 8 years but snow and rain still likely to make headline news in the Pacific Northwest with twice as much snow as last year.

5.      Parts of California are likely to have the wettest conditions in 9 years bringing the threat for at least one major flooding/mud slide event this winter.

6.      Southwest may escape winter’s wrath with the warmest conditions in 8 years and 31% below average snowfall.

7.      A drought may begin to develop in the Southeast by late winter.

9.      Winter seasonal merchandise sales will experience the best winter in 3 years with sales up 20% to 100% in the Eastern half of the U.S. with snow accessories up 250% or more.  However, overall retail sales and store traffic will be severely hampered.

10.  Home heating bills will be up 15% to 30% in the East but down as much in the West further eating into consumers’ discretionary spending going into 2014.

The global leader of actionable year-ahead business weather guidance for retailers, manufacturers, pharmaceutical companies, agricultural firms, financial analysts and now consumers worldwide.  Clients include some of the world’s most respected and successful companies like Wal-Mart, Kohl’s, Target, AutoZone, Anheuser-Busch, Johnson & Johnson, Clorox, Coca-Cola, 3M, JP Morgan and over a hundred others.  Its business-centric weather solutions and understanding of how consumers respond to the weather is used throughout organizations to help "manage the weather risk”.  Utilizing technology first developed in the early 1990s, Weather Trends International’s unique statistical math-based trade secret formula forecasting methodology projects temperature, precipitation and snowfall trends by day and week a year-ahead for 6.4 million locations in all 195 countries with industry leading 85%+ accuracy.  WTI is recipient of 12 business and technology awards including #5 on Forbes Magazine’s list as ’s Most Promising Company.  Offices in , and   Visit www.wxtrends.com or www.wt360.com for more information.